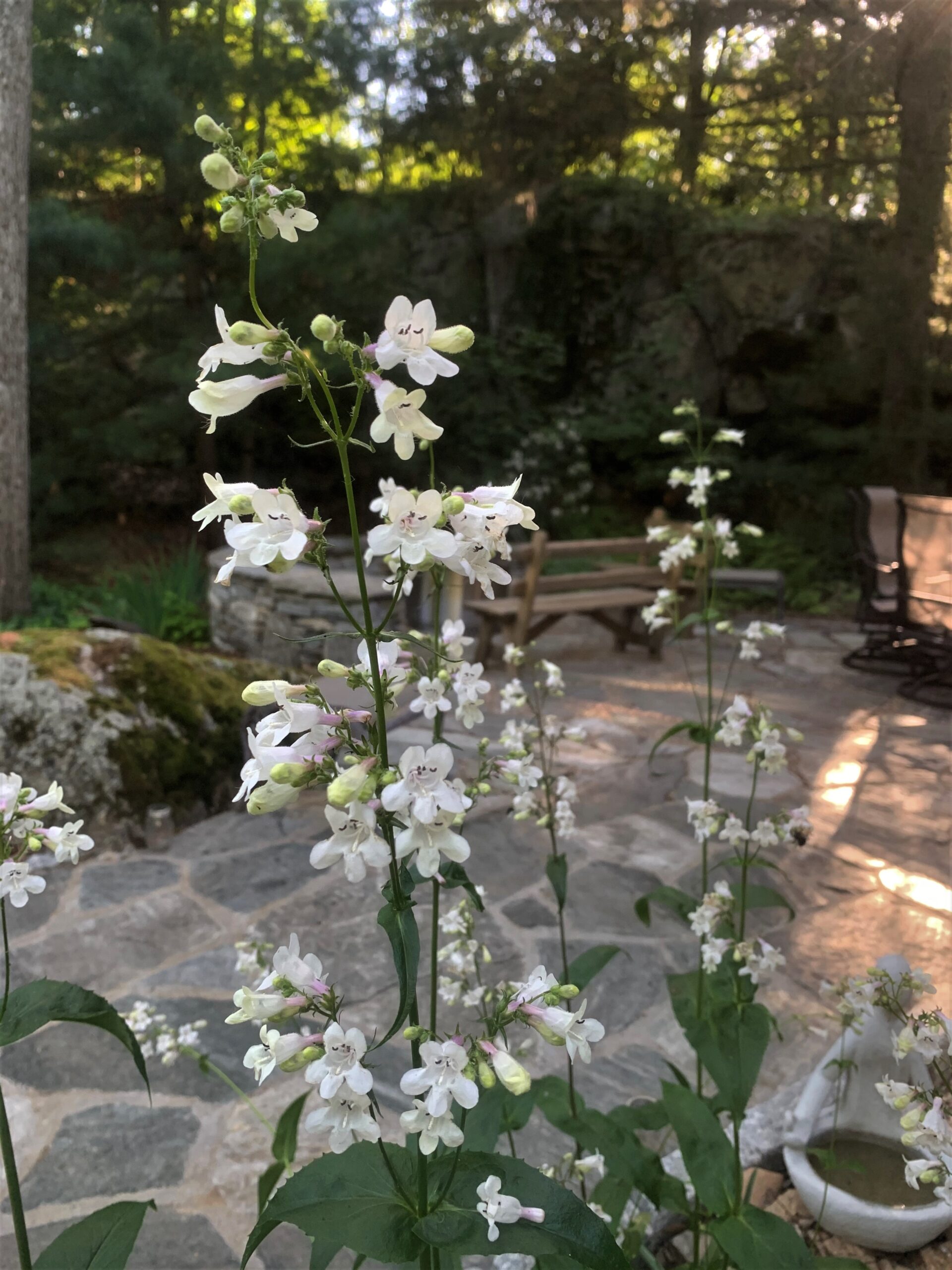 Image of penstemon digitalis in the author’s garden. Photo credit to the author.

Larvae and insects and gardens, oh my!

I’ve encountered many “bugs” in my life, a lot of them quite unpleasant. (Centipedes spring to mind . . .) It is perhaps ironic, then, that a metaphorical bug has formed the deepening center of my admiration for creatures I previously mostly avoided, if not outright disdained.

If you haven’t already guessed, the bug to which I’m referring is the gardening bug. From the very first bulbs I ever planted at our very first house, I was bitten, and smitten.

That first foray into New England gardening (often affectionately known as “rock-farming”) was difficult and full of uncertainty. Every stab of shovel into dirt was met with an unforgiving “clank. ” This, as it turned out, only increased my determination.

I carefully measured the depth of every hole; the spacing of every future flower from its neighbor. To properly feed them, I carefully sprinkled each with just the prescribed amount of bone meal fertilizer. I had decided on bulbs, by the way, because most of them are not particularly picky about their sun/shade ratio. That was helpful since we lived pretty much in the woods.

The next spring, I monitored all my planting areas every single day, an expectant parent awaiting the stork’s arrival. I was giddy as every plant emerged. Alas, half of my dreams were summarily consumed by the bold and unrelenting deer who apparently patrolled my yard far more obsessively than I. What little survived (daffodils, mostly) still had me hooked.

When we moved, I was thrilled to have a larger yard, with a lot more sun. A whole new world of plant options opened before me. My obsession grew as I planned, plotted, hacked, planted, and managed new garden spaces. I delighted in my ability to finally be able to choose flowers I’d admired but previously hadn’t been able to grow for the lack of sun.

I did what so many avid gardeners do: planted and tended beautiful, colorful, and even exotic plants. My grail was flowers and color as much as possible from spring through fall. It never occurred to me to think any differently about the purpose of my landscape. It was for beauty and for show.

But then, as the saying goes, the worm turned.

Then we made the not-insignificant decision to undertake an enormous addition/renovation to our house. With the onset of that work came the destruction of the garden beds around it. We moved and transplanted everything we could. I resigned myself to more or less a “maintenance-only” mindset for the duration of the project.

A huge element of the work would be to shift ourselves into a much more energy-efficient living situation. This objective, originally undertaken for very practical purposes (who wants to spend any more on energy consumption than absolutely necessary??) began to take on a much larger significance to me as the project progressed. It pushed me to think about consumption more broadly. I started paying a lot more attention to our energy footprint beyond just heating and cooling our house.

As I read more about the very negative impact of plastic in our environment, I began to save every eligible bottle and can for redemption, rather than just sending it off to the dump for a “recycling” process which, too often, doesn’t really happen.

Composting the vast majority of our kitchen waste became another obsession. I bought myself a lidded, carbon-filtered 2 gallon compost bucket for my countertop and a compost spinner for the backyard.

Nine years into our “adventure,” I could finally start thinking about garden planning again. (Because where was I gonna use all that great compost?!) But this time, thanks to my evolving environmentalism, my entire perspective on gardening had shifted. Now, rather than focusing on pretty flowers, I’m embracing a radical concept, and I have a new mantra when it comes to my gardening: I am a steward of this environment, and it’s up to me to help it in any way I can.

Among the many things I’ve learned is the critical and delicate balance between all levels of our ecosystem. If we want our air, water, and food to be healthy, we need to work in concert with the land, rather than against it. Sadly, our gardening and farming practices over time have pitted us against the environment, rather than teaching us to work with it. It’s very simple, really: if we support the land, the land will support us.

I’m sure I probably don’t have to write a missive here on bees and other pollinators and why they are so crucial to our survival. (In a seriously snug nutshell, if you like food, you should love pollinators of all stripes.)

I, and so many people I know, love our native birds and their stunning array of song and color. I’ve only recently begun to really understand, though, how certain species of birds rely nearly exclusively on specific insect larvae for their survival, or on specific fruits or berries to thrive and reproduce at a level to outpace predation and other elements of their demise. (I will only introduce here the complications to bird and insect populations that occur because of our need to light up the night as excessively as we do!!) And it goes both ways: birds can also be important pollinators and vectors for the growth of all kinds of plants (including certain non-native invasive ones!)

All nectar is not created equal

So, back to the bugs, for whom I’ve developed a grudging, if deepening respect, if only for the native ones. That doesn’t mean I want them in my house, or flying into my face or hair, but it does mean that I’m increasingly avoiding willfully murdering them en-masse.

In the same way that birds and other creatures rely on them for sustenance, the bugs themselves often rely on exclusive plants for their survival. Most of us are familiar with the milkweed/monarch butterfly connection, but there are so many others.

And, even when the reliance isn’t quite so exclusive, I heard an excellent analogy recently about food choices for our avian and insect friends that I won’t soon forget. Yes, birds and insects may seem to flock to certain non-native species for their nectar, pollen, or fruit. (I’m talking to you, butterfly bush!) Hummingbirds may delight in the sugar water we offer in our ubiquitous feeders.

As is the case with humans, though, just because it’s there and they go for it doesn’t make it healthy. Equate hummingbird sugar water with a diet of ice cream or twinkies, and the nectar or fruit of non-native species to chips, lunch meats, or spray cheese. Yes, it will take away your hunger pangs. Keep consuming it for years though, and there will be hell to pay. The price for birds and insects, unfortunately, is exacted much more rapidly on individuals of those populations than it is for us, due to their much shorter life-spans to begin with.

As go the individuals, so go the populations.

Every little thing we do is magic. Or poison.

The challenges so many gardeners face now with invasive weeds and out of control pests are direct results of decades of obliviousness to this reality. We’ve disconnected ourselves in so many ways from listening to what nature wants to tell us. We want perfect lawns and exotic flowers and control and “low maintenance.” But the truth is that those lawns and flowers consume habitat for native species and provide sustenance for non-native pests like Japanese beetles and their larvae, providing nothing (or next to it) for declining populations of important and beneficial support. Not to mention the horrible consequences of runoff from the fertilizers and pesticides we have to apply to keep everything “healthy.” Times 100 million and counting.

Fucked up? You bet.

So, I’m going native. I’m trying to do whatever I can to take down and control the non-native invasives that quite literally are killing our livelihoods. Many are insidious spreaders: roots or rhizomes that go deep underground; prolific self-sowers, seeds and fruits eaten by critters, pooped out, and propagated hither and yon.

I’ve seen with my own eyes how oriental bittersweet vine will slowly murder a giant oak tree, developing root systems as big as a human leg, climbing, strangling, and ultimately snapping the trunk. Japanese knotweed that will choke out any and everything in its path. I’ve also seen “burning bush,” so lovely and brilliant in the fall, overtake entire patches of woods and borders, hogging up light and nutrients, birds dropping seeds everywhere to gobble up even more. (Try native spicebush or underappreciated staghorn sumac instead!)

Every new plant I now add to my landscape is a true native. I won’t even let in the cultivars. I’ll find native “spring ephemerals” for the upshot of bloom I crave in the spring to help feed the native critters as they emerge. I’m learning to identify native friends and harmful foes.

My idea of what’s beautiful has been forever altered. I can watch one of seemingly 30 members of the insect oder hymenoptera I’ve already seen doing their work this season. (They are the bees, wasps, and hornets.) I will get lost in their pollen-covered drunken stumbles through the blooms for hours if I let myself.

Will I be able to eradicate every bit of bittersweet or burning bush? Probably not. I may never be able to bring myself to rip out the 40+ year old rhododendron cultivars in my backyard. Same for the equally wizened, 30-foot-tall English hollies at the end of the driveway. But I can convert most of my lawn to native wildflowers in the coming seasons. When my beloved pink dogwood finally kicks the bucket, I can replace it with a spectacular native redbud.

I can obsess and patrol and dote as much as I ever have, but now, it feels even bigger.

I am a steward of this environment, and it’s up to me to help it in any way I can.