Caregiving is a Rollercoaster 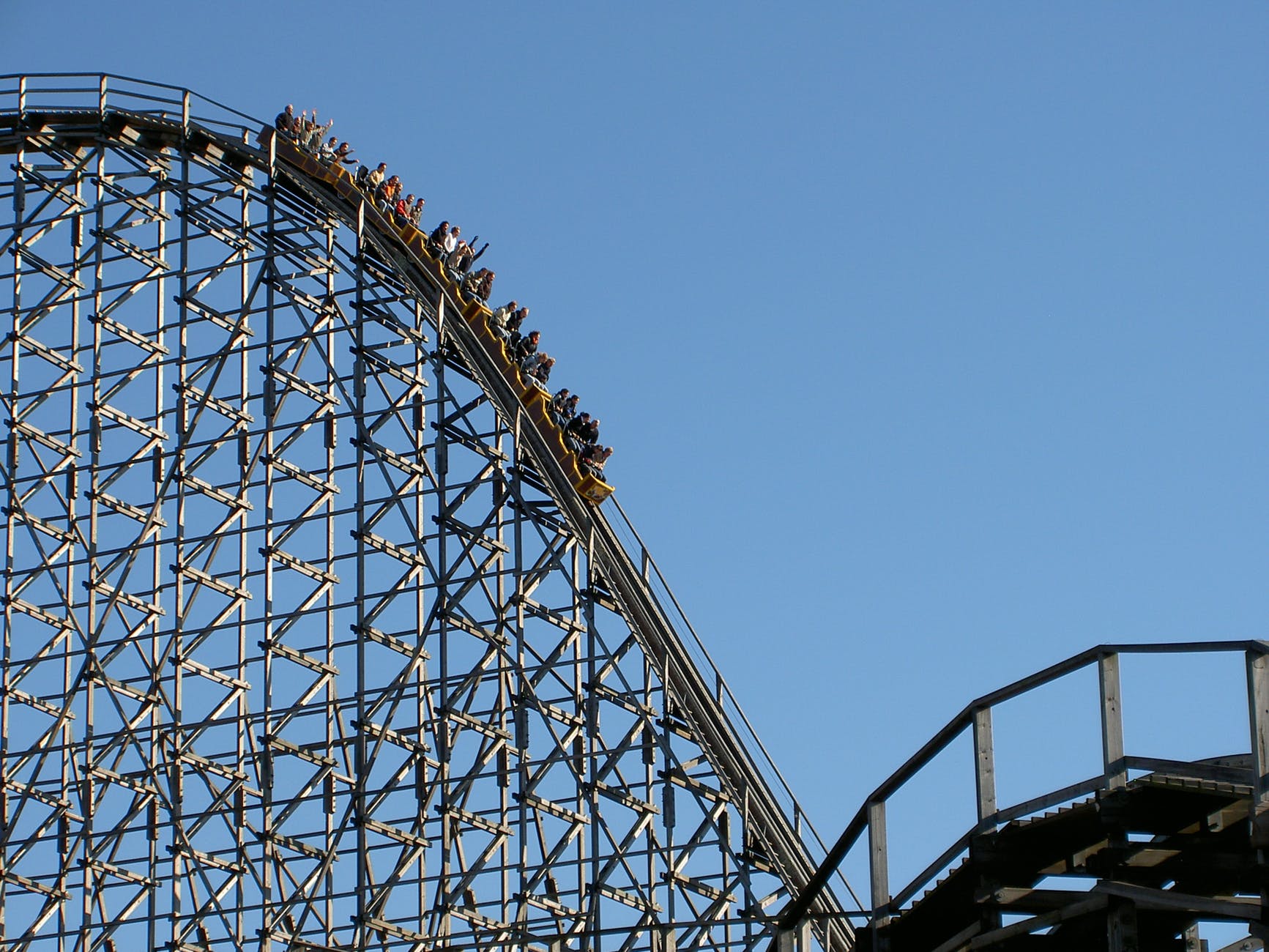 And right now I’m on a long drop

I haven’t written anything about mom and dad for a while. The truth is that I was starting to feel like I was telling the same story every week, but with slightly different details. I’m sorry to say that I’m not sure this will push too far beyond that same pattern.

Mom & dad both had appointments with the geriatric psych in September. Because it had been about a year since dad saw them for the first time, they did another SLUMS test with him. His score was the same as a year ago, which is good.

So that was a good day. And there was the three-day period over which mom decided it was time for a new car. On day two we went and bought one. On day three we paid for it and picked it up. That was fun.

Otherwise, there hasn’t been a lot of that lately.

Get up and move around. Turn off the TV. And drink your water!

I’m not referring here to the emotional drain of broad caregiving responsibilities. I don’t even feel like I can lay full claim to that, since I’m not living with them and we have a caregiver in place – at least we do during the weekdays. For 7 1/2 hours a day.

It’s become crystal clear to me lately though that this is NOT ENOUGH.

What’s exhausting is the repetition. I’m trying to teach someone who’s losing synaptic connections in his brain a few key things that apparently never really sank in as important earlier in his life.

About six weeks ago, I brought in a physical therapist to start working with him once a week (I was actually hoping for three times a week but the therapist couldn’t work it into his schedule right away). Last week, we bumped it up to twice a week, which begins today. Other than the physical therapist, none of us can motivate dad to get up and move around at all, unless there’s an appointment of some sort.

I am beyond certain that his lack of movement is greasing the skids of his decline.

That, and the fact that he, like many elderly people, is chronically dehydrated.

On several occasions in the past six weeks Tim and I have had to run over there in the early morning to get dad out of some difficult position: often on the floor in their bedroom, which, thankfully, is thickly carpeted; sometimes stuck in some ridiculous slumped position in his lift-recliner; sometimes having slithered off one of the other armchairs in their bedroom – you get the picture.

During one bad windstorm a few weeks ago it was a phone call at 2 a.m., and us speeding down there in Tim’s truck, hoping a giant branch, or entire tree, didn’t fall on us or in our path along the way. We got there to find dad on the floor next to the bed, unable to right himself, Fox News blaring on the TV in their bedroom.

We got him off the floor and into bed. I told them in no uncertain terms that they had to turn the TV off before they go to sleep. That it’s a scientifically proven fact that sleeping with the TV on, or even the radio, interferes with normal sleep patterns, and that makes dementia symptoms worse. And. Dehydration also makes it worse. I noticed his nearly-full water bottle on the nightstand. “You need to drink more water, dad! Here, have some water.”

I know they stuck with the no TV at night thing for at least a little while because my mom told me a week or so later that they’d been leaving the TV off and she felt like they both were sleeping much better. “That’s awesome! I’m so glad!” I cheered.

I don’t know if they’ve continued, or if they’ve backslid since then. Old habits die hard. I can remember the sounds of their favorite a.m. radio station playing all. freaking. night. on their bedside clock radio when I was growing up. 24-hour news is their perfect 21st century replacement.

And God knows how much water he’s really drinking, even though I talk about it during every visit, every day.

Most of the time when we get there after sunrise, he’s testing the capacity of his heavy-duty disposable undergarments, and a complete change of clothing and wash-down is required. I don’t feel right leaving it up to mom to handle on her own, so I’ve ended up helping.

I know this is not what dad had in mind when he worked out their estate planning.

After each time – and the count is now well-into the double digits over the past six weeks – I’ve gently broached the idea of bringing in more extended care. Each time, my suggestions have landed with mom like a raw egg dropped on the kitchen floor. “Splat.”

So let’s just pile on, shall we?

There are other things that are exhausting me, too – things that have nothing to do with early morning phone calls or rubber-gloved hygiene needs – and which are testing the limits of my Zen. Red tape and stupid, redundant paperwork with a major financial firm with whom they have some of their investments has me straining to maintain any shred of patience.

We’ve recently made some changes to the structure of some of their estate planning arrangements, with the fully executed legal documents that go along with it. Doing so required a trip to their attorney and all the pomp and circumstance that goes along with getting dad anywhere:

The search for the handicapped hanger that goes on the rearview mirror.

The sheer physical coordination involved with getting him up, dressed, and ready for the outside world. (This may someday warrant its own post. It’s an event every time.)

The hauling and positioning of the walker in the back of the car.

The s-l-o-w walk from the car, and into wherever it is we’re going. Then the reverse when we’re done.

The physics of the slight up-, or down-hill slope of the access ramps with a guy who doesn’t always remember what the handbrakes on his walker are there for. (“Slow down, speedy, or you’re gonna end up on your face!”)

The paperwork and “medallion” signatures this financial firm requires are enough to make me scream. Especially since another firm my parents work with, and with whom they have an order-of-magnitude greater assets, did not have the same requirements. And they have the legal documents. Signed in the presence and witness of their attorney and his assistant, who have known him for over thirty years.

I’ve held it together in the presence of the advisors because I know if I were to unleash the way my inner Pele-fire-goddess would want, I’d be getting a security escort out of the building. But it is just not feasible for me to get dad all the way down to their difficult-to-access offices forty miles away just to sign paperwork.

I ask if they – a giant, well-known, financial advisory – can just send someone out to my parents’ house to do, in effect, a house-call for the signatures. This apparently sets off enough alarm bells to now require a letter from his doctor to certify his compentency to sign. (Despite everything, the vast majority of the time, he’s “there” enough to be aware of what he’s signing. At least for now.)

Okay, BUT, they tell me this may not necessarily guarantee that the “workaround” they’re trying to employ to allow his remote signing will even end up being acceptable.

I’ll jump through the hoops to get the letter from his doctor anyway, because that won’t take as much time and effort as all the steps that would be required to get him physically in front of them.

Meanwhile, back in sick bay

But I digress. On the physical-decline front, by this past Sunday afternoon, it struck me that the degradation we’ve been witnessing with dad over the past couple of weeks was beginning to look a lot like what was going on with him when he had sepsis last December. It hit me like a brick on Sunday evening that he probably had another urinary tract infection. As soon as I had formed the complete thought, I knew it was true. Everything fell into place.

I called the doctor first thing on Monday morning. After six hours of running around between the doctor and three different labs, which was all executed by my ever-dutiful husband due to previous commitments I had on my calendar, my suspicions were confirmed. We also confirmed by x-ray that his lungs are clear, and thus, my assertions to my mother that his recent cough has been due to post-nasal drip, are now fully supported. I know a post-nasal drip cough when I hear one.

They started him on a double antibiotic Monday. The doctor called yesterday to let me know they want to do another round of bloodwork before the end of the week and to see dad again this coming Monday because of the white cell counts they saw in this past Monday’s bloodwork.

Not surprising, since it is a urinary tract infection.

Piling on to the piling on

Now it’s 1:30 on Wednesday afternoon. The physical therapist just texted me to say he got there for their appointment late this morning and was a few minutes into the exercises for today when dad “ceremoniously threw up,” so he decided it was best to let dad rest. He suggested that for now we just focus on . . . wait for it . . . hydration, and to keep him posted regarding his scheduled visit on Friday.

My first thought: “did he just vomit up the antibiotic?” Thankfully, mom says she gave it to him much earlier this morning. But now vomiting? What’s that about?

Fast forward a few hours – I went over. He seemed to be feeling better. I ran out to pick up some ginger ale. Got him started with a few sips. Then a few sips more about ten minutes later. Had to go to an appointment. Had their caregiver continue the process while I was gone.

Stopped on my way back home a couple of hours later. No more vomiting. Told mom to be sure she kept him sipping every fifteen minutes or so. Later have him suck on ice chips. Keep him hydrated. I’ll see you tomorrow morning. We leave at 9:00 for your cardiologist’s appointment.

And that’s a whole other story. The cardiologist is a pre-op. We found out that Mom has kidney cancer, though this is not as dire as it sounds. It’s a contained tumor in one kidney. This won’t be what kills her.

The nephrologist believes he should be able to remove the tumor and leave the rest of the kidney, but, as we all know, we don’t really need both of our kidneys, so if it turns out to put the kidney at risk, they’ll just do the full radical nephrectomy.

But first, the cardiologist’s clearance. And bloodwork for mom, too. If I get dad’s paperwork tomorrow, maybe we’ll make it a bloodwork party on Friday for both of them.

Amidst all of this, mom has agreed to give an overnight caregiver a try. Alleluia. We’ll have someone in for 12-hour shifts overnight this weekend. Her name is Doris. She’s coming to train with their regular caregiver for a couple of hours tomorrow afternoon.

I am crossing my fingers, hard, that they love Doris. Dad needs the extra attention and support. Mom needs the extra support just as much. I need to give up the rubber gloves and the worry that mom’s waiting until the situation is overwhelming before she calls me.

I am so grateful that dad planned for this.