I figured I’d break things up a little bit this week so it’s not just bathroom, bathroom, bathroom (I’ll get back to that though, I promise. As I’m typing, we’re all done with the wall tiling and Tim is now cutting and dry-fitting the floor border. It’s exciting)!

For this week’s entry, though, I’m going to roll it back for some historical (and structural) perspective. When we first started thinking about and planning this project (like, more than a decade ago) we knew we’d want to make the house as energy-efficient as possible; that much was a given. While it was absolutely adorable, the prior incarnation of this place was the home-energy-equivalent of a miltary tank, where “efficiency” might be more effectively measured in “gallons/mile” than the reverse. Here, I swore if I ventured to the cold basement and stood in front of our oil tank in February, I could practically watch the gauge dropping as the furnace ran. Built in the early 1950s, the house may have been as solid as the rock that surrounds it (and that you can’t help but find anytime you try to sink a shovel into the ground around here), but it was so poorly insulated and air-permeable that you could practically see the curtains move when the wind blew at anything more than breeze level.

Tim, having been a subscriber for a couple of decades to “Fine Homebuilding” magazine, had followed energy-efficient building techniques through that publication for years. He’d been dreaming of employing those techniques on his own house for as long as I knew him. Whatever we did here, it was going to be something that went well-beyond standard building practices.

I first became aware of the European “Passivhaus” standard sometime in 2008. It was winter. There was an article in the Sunday New York Times magazine about it, and, after reading it, Tim declared that *this* was what we were going to do. I read the article with fascination, especially one specific example that has remained with me ever since, of a home out in Idaho that was built to the standard. There was no central heating system (I’ll explain that seeming insanity in a minute). The owners went away for several weeks in the middle of winter, and when they returned, the temperature in the house had dropped only into the 50’s. With no heat. For anyone who lives in a cold winter climate, that is truly remarkable.

You can read more about the standard and its history here, but here’s my quick interpretation of how and why it works: the primary principle is one of air-tightness, combined with super-insulation, sort of the same way a Thermos (or, these days, maybe a Yeti?) works. You put something nice and hot, or nice and cold, into something that’s airtight and super-insulated, and it retains its temperature for a very long time. Much of heat and cooling loss in typical homes happens because of air leaks and what’s known as “thermal breaks.” If you can eliminate, or radically reduce those things, you’re way ahead of the game. Don’t panic about the air-tightness – that’s well-addressed.

Back to the idea of how you can get by with no central heating system: the reality is that if you do this correctly, the heat of simply living (appliances such as your refrigerator, cooktop, oven, iron, dishwasher, etc, throw off heat; bodies throw off heat; showering and bathing throw off heat) is nearly, if not completely enough, depending upon some other factors, like whether you can build to take advantage of passive solar.

We did a lot of work “under the covers” to ensure we were airtight (including utilizing copious amounts of a special tape made in Europe specifically for air-sealing at every single seam of plywood, around the windows, and doors; installing windows and doors that met air-tightness standards from Canada and Ireland, respectively). We built with a double-wall construction technique that allowed for a full “envelope” around the structure, which was then filled with dense-pack cellulose insulation, meaning not only would we stay toasty warm (or blissfully cool, depending on the season), but also that we’d have the most epic windowsills ever (15” deep!). So if you’ve noticed the deep windowsills in photos, that’s why.

We did end up meeting the airtightness part of the standard (a day of nail-biting anxiety and then, elation); closely followed by installation of the air-exchange system (which came from Germany). The energy usage part is evolving (solar not yet installed), but suffice it to say that for now, our costs to heat (and light) the entirety of the house, including the basement (so about 3300 square feet) is a little less than what we were spending to heat and light the original house, which was about half the size. Solar should pay for itself in 5 – 7 years once we do install it.

So I don’t think we’ve met the full standard yet, but even if we don’t, we’ve definitely achieved Tim’s dream, and built not just a house, but a trove of knowledge on energy-efficient home building. 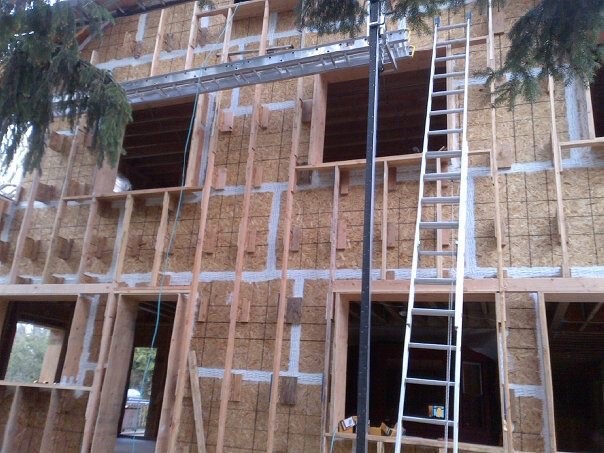